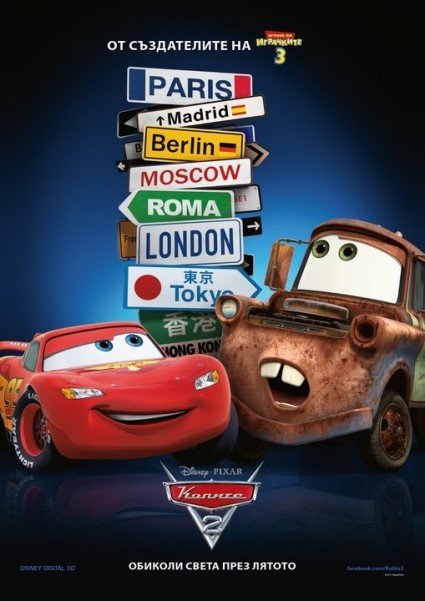 Captions don't count: The original “Cars” inspired my very first Three-Word Review, as I believed I could sum up its entirety to a co-worker by saying, “Beautiful but boring.” And here we are at the sequel, which is even more beautiful and – through explosions, spy gadgets and incessant jeopardy – somehow even more boring. “Cars 2” delivers cartloads of James Bond blah-bah and stand-by-your-friends gabbity gab, and somewhere near the end I’m waving my hand in the universal “speed it up” signal, because I’m tired of driving down this highway on a flat tire. Just end it already! What director John Lasseter thought was an exciting, twisty romp is actually unintelligible and self-indulgent and sadly, strangely weak. And it stings to say it, because this is Pixar we’re talking about, and they should know better. Lasseter, more than anyone, knows story. As a producer and director and creative leader at Pixar since Day One, he has overseen some of the most powerful movies, animated or otherwise, ever created. Under his hand, Pixar has become synonymous with top quality storytelling. So what happened here? Reportedly, the “Cars” concept is Lasseter’s baby, a personal project bubbled up from his primal love of rolling vehicles. That childlike infatuation must block all sense and sensibility when making judgment calls about his talking-car dream. He indulged his whims, damn the torpedoes – those torpedoes being “original story” and “meaningful character” and “coherent plot,” all of which hit home and sank this leaky ship. But take heart: The teaser trailer for next summer’s Pixar outing, a Scottish fairy tale called “Brave,” came out this week, and in 60 seconds hope returns that Pixar never really lost its way. It can be excused an off year every couple of decades.